A Story Of Cathay Williams 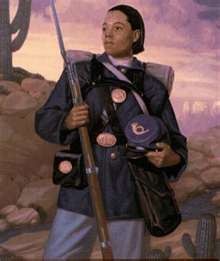 ​Cathay Williams was born in 1842 outside Independence, Missouri. Born into slavery she served as a house girl for a wealthy farmer. Things changed however when the Civil War started. Union soldiers would later take the plantation on which Cathay served. Several female servants, including Cathay, were taken to Little Rock, Arkansas to cook for the troops. Cathay dutifully served in this capacity, traveled with the army all around the South participating in all aspect of military life to the extent that a woman could. She was eventually sent to Washington to serve as cook and laundress for a general and his staff. While with this general she was on the front lines with the troops as they raided the Shenandoah Valley and finally on to St. Louis for an extended stay. During this time, congress passed an act authorizing the establishment of the first all Black units of the military (two Calvary and two Infantry), later to become known as "Buffalo Soldiers". In order to provide a living for herself and not be dependent on others, two very important principals to Cathay, she decided it was time to join the army. In November of 1866 she enlisted in the 38th US Infantry as William Cathay". Since there were little or no medical exams required, Cathay was able to successfully (at least initially), pull off this disguise. It is said that two others knew of her true identity, a cousin and a friend, but both loyally kept her secret. During Cathay's tour of duty, she performed assignments required of her fellow troops, such as learning to use a musket and guard duty. These skills were essential as her unit was soon deployed to Fort Curnmings in 1867. The 38 was sent to protect immigrants traveling one of the most dangerous routes to California at the time, Cooke's Canyon. However, while at Fort Cummings, there was a mutiny among the troops. Several where brought up on charges or jailed. Cathay is not known to be among them. It did however take its toll on her spirit to serve and she decided it was time to get out. She did so by reporting she was ill prompting an exam by the post surgeon. It was then her secret was discovered. Cathay Williams was honorably discharged on October 14, 1868 having made her place in history as the first female Buffalo Soldier to serve.